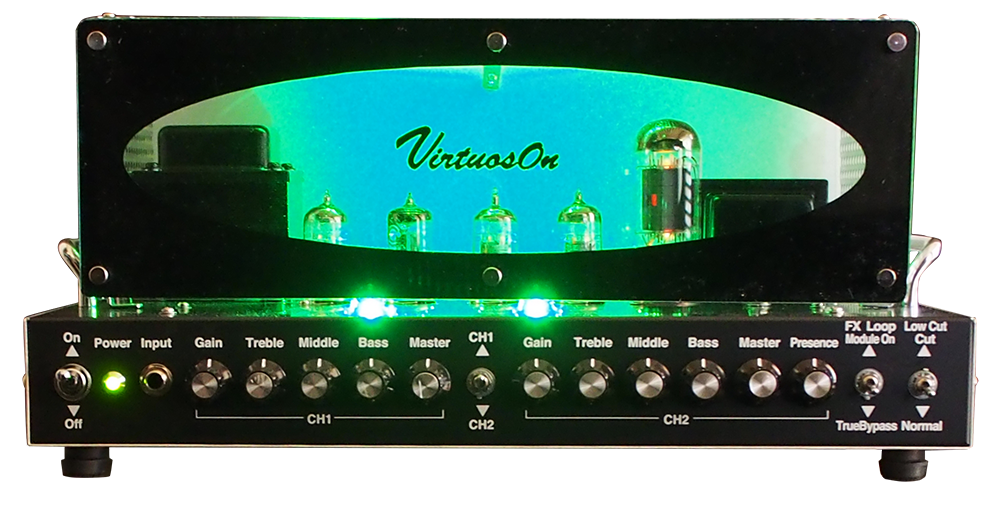 Independent 2 channnels tube amplifier: Aggressive Distortion & Sparking Clean tones.
The cabinet made of aluminum and carbon panels: Unprecedented in the guitar amplifier cabinet structure.
To explore further evolution form our product Type-1, we developed the Type-M-Head and Type-M-Cabinet.
Electrical circuit has 100% tube circuit to amplify sounds.
Amplifier is added in the aggressive distortion circuit to the sparking clean circuit of the Type-1.
Each of preamplifier cannnels have independent circuits.

We restrain the output power to 5W,
because this amplifier and cabinet is developed for the guitarist who pursue earnestly guitar tone and technique at their home.

Of course, Type-1’s electrical circuit has 100% tube circuit to amplify sounds.
Construct this with a hand wired on the turret board. 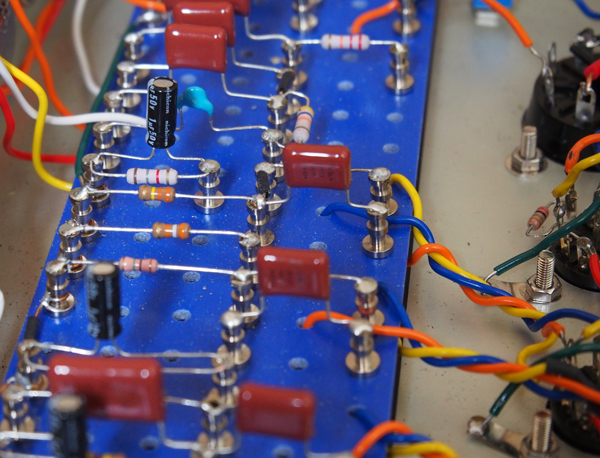 The CH-1 and CH-2 are two completely independent preamplifier circuits, including tone circuits are.
CH-1 has two gain stage with single 12AX7 tube,As with Type-1,whitch offers sparkling clean tone with quick responce tubes.
The CH-2 has four gain stages with double 12AX7 tubes.
Its circuit is designed for not only distortion level but sustain feeling, and harmonic overtone characteristic required for a guitar amp.
As a result, CH-2 generates too much deep distortion with its gain knob is over 12 o’clock.
We knowlmost guitarist will not play with such a deep distorted sound, but less gain designed circuit can’t have nice sustain and harmonic overtone.
Learn More How to use CH-2 Distorsion

In order to enable that guitarists can play technical licks which needs effectors such as delay during distortion sound,
Type-M Head equipped with an effect loop.
This effect loop is also composed of single 12AX7 tube buffer circuit and amplification circuit.

As mentioned earlier, we restrain the output power under 5W ‘cause this amplifier is a tool for “guitarists who pursue tones and techniques”.
While restraining the output, players can replace power tubes 6V6S(6V6GT) to 6L6GC in order to expand tone variations as well.
As you know, 6V6s and 6L6s tubes has its own proper bias voltage. In generally, players can’t replace 6V6 to 6L6 or 6L6 to 6V6.
Therefore, Type-M-Head equipped with a switch to change the bias voltage.
If you remove the head cover, the switch is in front of the power tube socket.