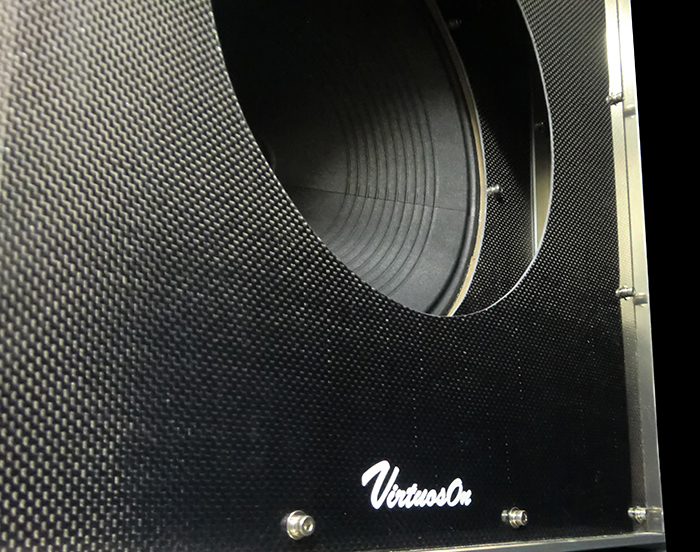 First of all, we must say that the speaker-mounting method applying resonance is not unusual today.
The most familiar existence is LCD TV and computer display.
In these products, more cases are increasing to use resonance ducts in order to output a wide range sound with a small speaker mounted in an extremely limited space.
On the other hand, how about a speaker cabinet of a guitar amps?
There is some variations of the cabinet include closed type, semi closed type, open type etc.
But these variations are all of “behind the cabinet”. 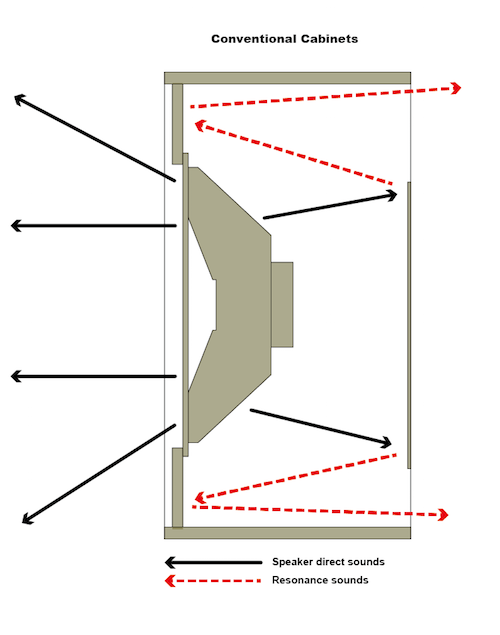 On the front side of typical guitar amp cabinets, it has single very thick baffle board without resonance structures.
Only cloth or net is installed for protecting the speaker units when we look at guitar amp cabinets.
We have noticed that “the thin baffle board is better to create clear sound” for many years ago.
The proper buffle board thickness is about 2 to 10mm (from 5/64 “to 25/64”),and also which is enough to hold the speaker unit.
One more point, we concerned that electric guitar sound is too much “raw” without electrical effects.
Even in a conventional speaker cabinets, resonance sound is emitted.
But which is occurring back side of the speaker unit.
At that time, the guitar sound is too much rawt because there is nothing in front of the speaker unit.
As a result, guitarists have to rely on electrical effects such as reverb and delay to get a comfortable sound.
So, what about other instruments?
There is an acoustic guitaras close existence to the electric guitar.
Everyone knows the acoustic guitar has a resonance body composed of a thin body and the body generates rich resonance sound.
You can notice that the ordinary musical instrument has its resonance body, even if you look at other instruments.
We can say the electric guitar was a special situation.
We focused on this point and attached a baffle plate in front of the speaker unit to resonate and succeeded in obtaining the resonance sound peculiar to the instrument. 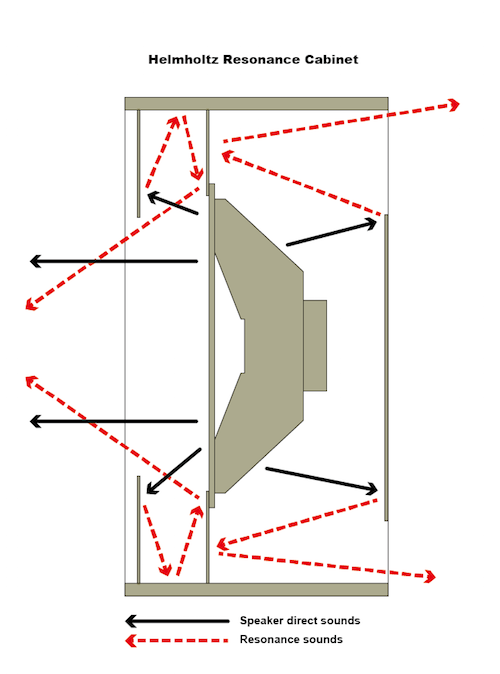 It’s the guitar amp’s new era with “Helmholtz Resonance Cabinet” which has a synergistic effect of thin & double baffles.
The guitar amplifier finally got out of the area of ​​”amplifying device” after a half of century since the electric guitar invented.
Now, we are convinced that guitar amps became a part of “Musical instrument”.
By the way, it is also possible to remove the resonance baffle on the front side by using a general size hex wrench.
Guitarists may notice the speaker sounds directly as same as general guitar amp cabinets when this front baffle is removed,
In addition, we will listen to a slight mistake of picking or fingering since the baffle board is designed very thin.
This can be said that extremely severe training is possible with the front baffle removed.
With the front baffle, you can play with feeling that you become a “Virtuoso”.
Without the front baffle, you can train to become a real “Virtuoso”.
It is just a speaker cabinet made for “Virtuoso”.

Not Simulation But Creation

Various of time based effects ware developed and created since tube electrical circuit ware in general.
For example, tape delay, digital delay, spring reverb,plate reverb, digital reverb which uses various signal processing algorithms.
Now a days, we finally be able to use convolution reverb with so many impulse responses.
We are recognizing the convolution reverb is ultimate” simulation technique of reverberation sound
However, in almost of instruments, reverberation or resonance sound is ringing in the instruments itself.
We can listen to its sounds very natural, because its resonance causes natural and physical phenomenon.
On the other hand, the reverberation technology that has been used for electric guitar has been through electrical processing.
Therefore, the guitarist sticks to the type of delay and reverb, and has been struggled to make sounds better for them.
So many guitarists need some kind of time based effects because electric guitar sounds are too much raw without electrical delay or reverb processing.
There, we had developed “Helmholtz Resonance Cabinet”.
We succeeded in generating the reverberation / resonance sound physically with its original structure.
Furthermore, it encourages the generation of further resonance sound and superior clarity by making the speaker mounting baffle plate to be very thin,
On the other hand, now a days in the world of guitar amp simulation, we can simulate various combination of cabinets and microphones with impulse response (IR) as well as convolution reverb
We recognize that convolution reverb technology is particularly useful in home recording work at midnight because this technology can be used easily at home with our PC and so on.
However, please note this method can only realize “the sound picked up by microphones”.
Moreover, the IR’s simulated sound is largely dependent on the “tone” when the IRs are recorded.
For example, you created an IR based on the sound of a guitarist “Player A”.
If you use this IR when you play the guitar, it will sound like “Player A” to the best.
It is a very effective method for anyone who wants to play simila to another Player A’s sound.
In othe words, it will not the sound of other players including you but Player A.
We are sure most IR is made from sine wave that doesn’t have organicl tone.
As a result, simulated guitar cabinet sound has inorganic,non musical tone, because that IR has only sine wave tone with a cabinet.
Most important factor is that the IR-convoluted cabinet sound is “the sound picked up by the microphone”.
Because all IR’s basic sound is picked up by the microphone.
It is not the sound as like as “The real guitar amp is beside on a player”.
On this point, “Helmholtz Resonance Cabinet” is not simulation but evolution of the guitar amp cabinets.
First of all, it is not a simulated sound, since it is a cabinet equipped with a real guitar speaker unit.
And with our cabinet, guitar players can play comfortable with its resonance and reverberation without using time based effects such as delay or reverb.
We are convinced our cabinet structure will be accepted by guitarists who have not been satisfied with the electrically processed effect so far.
In addition, the cabinet will sounds better than conventional cabinets even if it is small volume, so in the living room or the bedroom at home.
It will also appropriateway for pursuing guitar tone in your home.